Plan de Corones, or Kronplatz, also known as "panettone", is one of the most popular destinations for summer and winter sports in Val Pusteria and Val Badia.

At its summit, the Spitzhörnle, or Hühnerspiel, is 2,275 meters above sea level, and offers a breath-taking panorama that sweeps from the Dolomites (including the Marmolada, Sass Putia, Sassolungo, Civetta, Pelmo, and Lagazuoi) to the Rhaetian Alps and the Zillertal Alps. 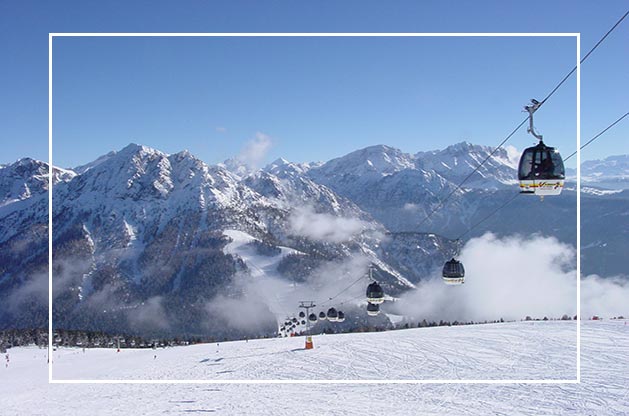 During the summer months, hikers and mountain bikers will fall in love with the area. For the hikers, there are numerous marked trails to explore. For the mountain bikers, the downhill mountain bike trail Hernnsteig was inaugurated in 2010. It is the first official downhill trail in South Tyrol. For those who like competitive cycling, the Giro d’Italia, has included a stage in their race three times in the past decade, with the finish of the race stage located at the top of Plan de Corones. Whether hiking or cycling, you are certain to find excellent huts where you can take a break and savour local specialties.

Kronplatz ski area, which is part of the Dolomiti Super Ski, is equipped with 32 modern lifts and features 49 slopes with a total length of 116 km of slopes. Local slopes are long with different degrees of difficulty. The slope that descends into San Vigilio include the sunny side of Plan de Corones / Kronplatz, which offers tracks for all levels. The slopes that descend into Olang are perfect for experienced skiers. The slopes that descend into Riscone, called Hernegg and Sylvester, are the steepest and most technical. For snowboarders and freestyle skiers, Snowpark Kronplatz offers several different lines with varying degrees of difficulty. If Kronplatz alone is not enough ski area for your taste, buy a Dolomiti Super lift pass, which gives skiers access to more than 1,000 km of slopes including Kronplatz, Alta Badia, Val Gardena, Val di Fassa, Alpe di Siusi, Cortina, 4 Passi, and others.

We recommend visiting Plan de Corones / Kronplatz in both summer and winter to fully take advantage of the many possibilities that the area offers.